About The Jones Mission 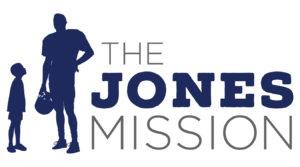 Ben Jones’ childhood adversity planted the seeds of a strong and still growing passion for helping kids in need. He strives daily to be a role model and show children experiencing hardship that anything is possible through hard work, determination, and prayer.

The Jones Mission provides at-risk youth with opportunities they might otherwise not have through grants, additional resources, and educational opportunities.

“My life has given me the opportunity to now lift up others and give children from all struggles of life a chance to fight another day. Please help me give back to the kids in our community and make a difference in as many lives as possible.” – Ben Jones, #60

The Jones Mission is a component fund of The Community Foundation of Middle Tennessee.

Hi. My name is Ben Jones.

I grew up on a cattle farm in Brent, Alabama. The farm is where I found my personality, developed my drive, learned about hard work and established my family values rooted in a love for helping others.

I, unfortunately, lost my father at 10 years old in a helicopter crash. In the same year, I suffered a blow to the head with a baseball bat. The impact caused a blood clot to develop on my brain and fractured my skull. This kept me out of all athletic activity for a year, a tough time for an active and athletic young boy. Although it was a tough period in my life, this time turned me into the man I am today.

As soon as I was cleared for activities, I threw myself into being the best athlete I could be. I played multiple sports as well as surrounded myself with the best role models I could find. One of whom was already very close to me, my older brother Clay. I looked up to him immensely and loved him fiercely. He excelled in sports and academics and was valedictorian of his high school class. Clay played baseball for the University of Alabama and then was drafted by the Detroit Tigers.  He gave me my competitive edge and the inspiration and support I needed to be recruited to play football for the University of Georgia.

Georgia was my dream school throughout high school because my dad was an alumnus. I wanted to represent my dad and wear his number 60 and make him proud! My time at Georgia fulfilled this dream for me and opened the door to the next chapter in my life. After playing four years at UGA, I was drafted in the 4th round to play in the NFL for the Houston Texans. That was in April 2012. After playing out my four-year contract in Houston, I signed with the Tennessee Titans in April of 2016 as a free agent.

Giving Back to Our Community

Ben and Alex Jones wanted to impact young lives in the Nashville community and began with the children and their families who need a home away from home during an illness.

The Jones Mission was established in 2017 at The Community Foundation of Middle Tennessee to help facilitate their ongoing philanthropic endeavor to help identify and give back to nonprofits working with at-risk youth in the community they call home.

Help give at-risk youth a chance to succeed.